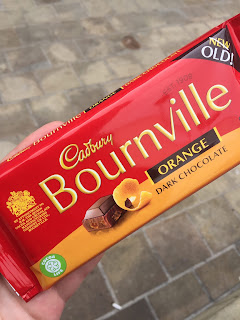 Following my last Spotted In Shops post I've been itching to try this Cadbury Bournville Orange bar. It's described as New/Old because it was last available in 2009, nearly ten years ago! I vaguely remember it along with the Old Jamaica version, and am glad it's been brought back - you can't beat the combination of orange and dark chocolate when it's done right. These are available for £1 from various stores, including Iceland Foods (where I found it) and Poundland. The bars contain 100g and are described simply as "Chocolate with orange flavoured pieces". 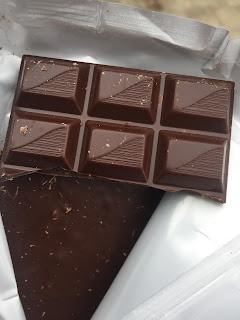 I was pleased to see a return of more traditional-looking chunks in this bar; yes they're smaller than they used to be, but at least they're not curved like they tried to make Dairy Milk. 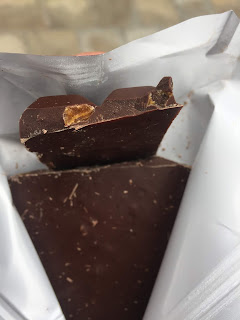 The orange pieces can be found nestled within the chunks and there seemed to be quite a decent amount of them (they make up 12% of the bar). 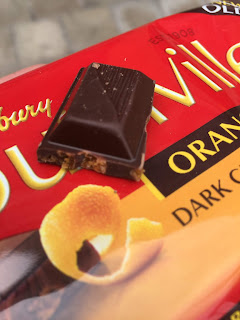 Firstly, the chocolate itself tastes as you'd expect; semisweet, not a true "dark" chocolate but still quite rich with more emphasis on the sweetness. I do like Bournville chocolate, it somehow has that classic Cadbury cocoa flavour and the lack of dairy lets it stand out more. The orange pieces are sort of crunchy and chewy, a bit like candied orange but softer. They're very nice and really liven up the bar, and made it all too easy to keep reaching for another piece. My only problem was that I wanted more orange! Despite the fairly decent amount, I think if the percentage was even higher this would be a fantastic bar.

Overall, even despite wanting a bit more orange I would rate this bar highly. It's nice to see Mondelez bringing back an old classic for a change rather than just adding Oreo to something else, and also good to see a bar that is suitable for vegans! (that said, there's a warning on the label that this bar isn't suitable for those with a milk allergy - presumably it's made in a factory with dairy).