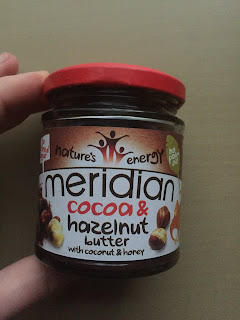 Recently I spotted Meridian Cocoa & Hazelnut Butter spreads reduced to £2.20 at Morrisons; I've had my eye on them for a while but the price always put me off...until today! It's a shame hazelnuts are such an expensive nut because it really is one of the tastiest around - it's no surprise that Nutella is so popular!

In fact Nutella was at the forefront of my mind when trying this - it almost seems like a healthier and more natural take on Nutella (which as we all know has a lot of sugar and palm oil, despite how tasty it is).

By contrast, this is made with 75% roasted hazelnuts, 10% honey, 7% cocoa powder, 5% coconut and sunflower oil. So it's more of a nut butter than a sweet spread, but still! I suppose a better comparison would be the innards of a Ferrero Rocher - it certainly has a similar crunchy texture. 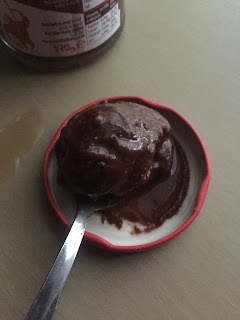 I opened the lid and things didn't look good - some of the oil had separated and there was a layer on top of the spread. Eek! I attempted to mix it back in which kind of worked. But when I took a spoonful to take a picture, it looked like...well, you know what. Just look at the picture above! ;)

I tried to forget how it looked and took a mouthful. The strong hazelnut flavour hits you right away, it's very potent and delicious and if you love hazelnut, it's here in abundance. Then there's the sweeter, almost floral honey flavour. I tried to enjoy it, but it just doesn't really blend with the flavour of the nuts. It's a bit too sweet, in fact. I think this would have tasted better with either coconut syrup or just regular cane sugar - I know by using honey they can claim it's sugar free, but c'mon! Honey is still sugar and it's an acquired taste - nice on toast, but not so much to sweeten other things.

Overall, I can't say this tasted bad at all but it somehow missed the mark. I think it could be improved a lot by using a different sweetener and bumping up the coconut content - make it a hybrid of creamy and nutty (whilst still being dairy free) and they'd be onto a winner. Then it might even be a healthy version of Nutella!