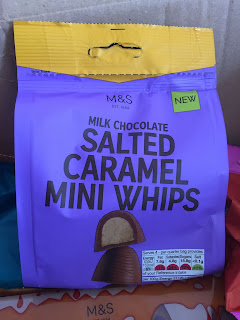 A big thankyou to Marks & Spencer Food PR for sending me a fantastic box of new snacks to review recently, which included some upcoming Halloween treats plus some festive goodies! Since those "holidays" are quite some time away I thought I'd start by reviewing their delicious-sounding new Milk Chocolate Salted Caramel Mini Whips. I've reviewed an M&S Salted Caramel Whip before so I was curious if these would be any different, or if they're the same thing in mini form. 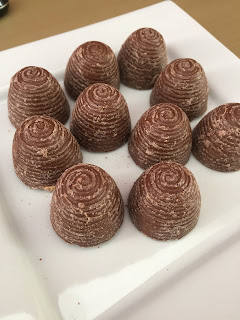 Described as "Milk chocolate filled with salted caramel flavour soft mallow (14%)", the bag contains 120g and I believe they'll cost £2 in stores. They're different to the one I've reviewed previously (which contained a layer of caramel) but that's not such a bad thing since the actual mallow in these tastes of salted caramel. Meaning - more salted caramel flavour! 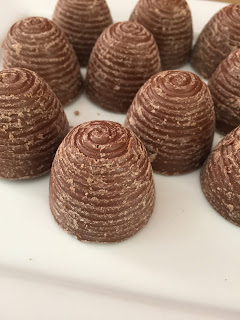 Opening the bag they certainly had a nice creamy chocolate aroma; definitely good quality when you compare it to mainstream brands. There was also a slight hint of the salted caramel which smelled pretty inviting. 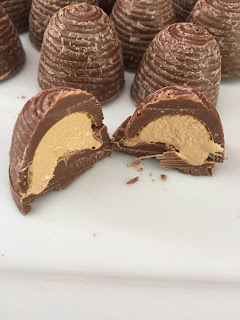 I cut one open, revealing a golden caramel mallow filling. It definitely smelled the part.

And it tasted it too! The mallow is gooey, not too chewy and just the right texture, with the butterscotch-like flavour of the caramel being quite strong. There's a hint of salt, but not too much and the balance is just right. The chocolate is creamy and rich and has a nice thickness that I liked - it makes the whips feel quite substantial. They're really very moreish, and I soon found myself reaching for another (and another!)

Comparing these to the Nestle Salted Caramel Whips launched last year I'd say these are better; the quality is obviously higher, the chocolate is thicker and the flavours taste more authentic.

Overall, what are you waiting for? Go hunt down a bag, hide them and eat them all yourself! ;) If you can't find them just yet do be patient - they'll be appearing in most M&S stores over the coming weeks.