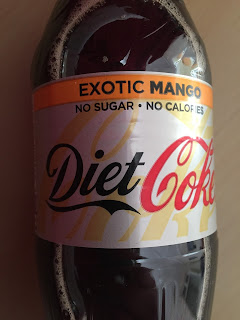 It's not often that Coca Cola bring out a new flavour, so when they do it's always an occasion worth shouting about. The last one was when Vanilla Coke was brought back (wayyyy back in 2013 - it feels like only yesterday!). More recently we had a Pepsi Max Ginger variety, which is about as exotic as the cola world gets these days. 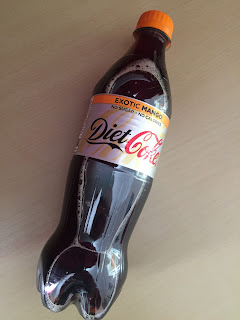 So it's quite exciting indeed that Coca Cola have gone for such a bold, fruity flavour to pair with Diet Coke - Mango! 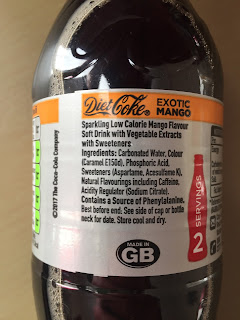 I was super surprised to find this in Tesco Express recently, I had heard rumours about it on Instagram but thought it would take a while to make it here up North. I immediately bought a bottle, not really caring about the price (turns out it was £1.10). 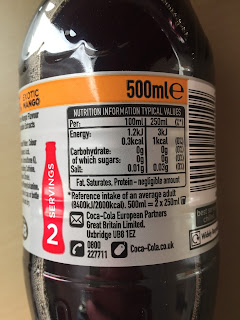 I waited until I got home to try this just so I could drink it from my bona fide special Coca Cola glass: 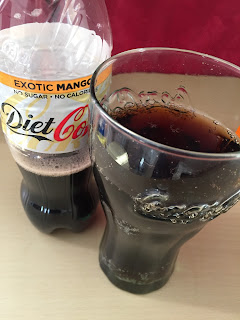 It's described as "sparkling low calorie mango flavour soft drink with vegetable extracts and sweeteners" and the ingredients are pretty much fizzy water, flavourings and sweetener. It also contains caffeine.

Taking a sip, I immediately tasted the mango and it was quite strong albeit artificial. This quickly gave way to the standard diet coke taste. It was kinda pleasant and definitely makes a change from regular diet coke, with the flavours both fighting for attention as you sip it. I wouldn't say the flavours blend together perfectly but it's an interesting drink for sure.

Would I recommend this? Yes, since it's more interesting than a regular Diet Coke, but I can't see it sticking around though as it's not super special or "unique" enough but it's still a nice change. I imagine it will be popular in the Summer months.