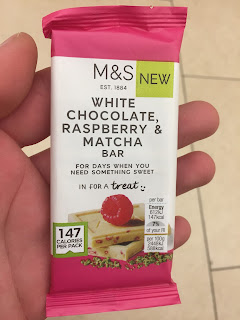 Whilst buying the delicious Swiss Blond Chocolate bar from M&S recently I thought I'd also try one of their new smaller "treat" bars with "healthy" additions. I went for this White Chocolate with Matcha tea and raspberry added because it sounded pretty unusual if not delicious. It's in the same range as the Latte Coffee Kick and Turmeric Coconut treat bars and costs 60p for 25g. 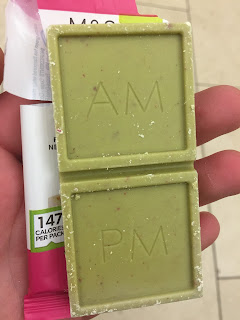 Described as a "matcha green tea flavoured white chocolate bar with freeze-dried raspberries" it's split it into two chunks - one for the AM and one for the PM. Really, M&S?! This may not be just any chocolate, but I certainly ain't saving half for later! 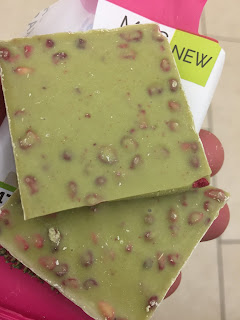 The dried raspberries were clearly visible on the underside of the bar. I can't say it looked all that appetizing to be honest. 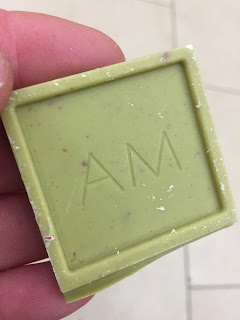 Starting with the AM square (it was actually in the PM - so I had a good excuse to eat both pieces!) I took a bite, and thankfully it tasted a lot better than it looked! The chocolate is super creamy but this is offset by the sharp flavour of the matcha tea, which actually blends really well with it. Opposites attract it seems! The raspberry pieces added some nice crunch and bursts of tart flavour, which complimented the chocolate well. All in all this is a strange bar that's actually pretty tasty, a nice mix of creamy, sharp and tart flavours all in one.

Overall, would I recommend this bar? If you're a white chocolate fan then yes, definitely, it's something a bit different and not quite as odd as it sounds on paper. Only for the adventurous though!