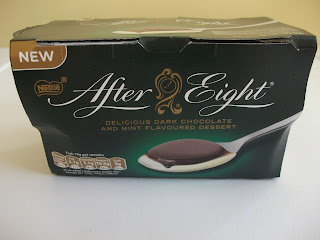 Many thanks to Aarun on Twitter for letting me know about these new Nestlé desserts. There's two new varieties - Quality Street Green Triangle and After Eight. They're currently on offer at £1 per 4-pack in Morrisons along with other varieties such as Rolo and Milkybar.

The After Eight desserts are described as "Delicious dark chocolate and mint flavoured dessert" and are made with 60% fresh milk. The pots weigh 70g each and come in pairs of two: 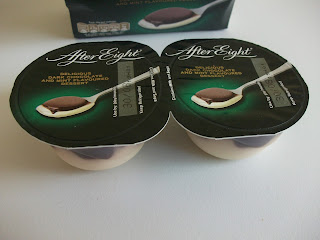 Each pot has a layer of mint-flavoured dessert at the bottom with a dark chocolate layer on top: 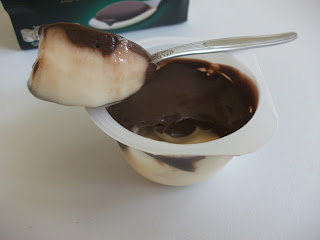 The mint portion tasted somewhat like white chocolate and was very sweet and creamy, whilst the dark chocolate portion was more cocoa dominant. I enjoyed the combination and the fresh mint flavour went well with the chocolate layer. The desserts were very tasty but I was a little disappointed they didn't have a more intense minty taste like real After Eights. They were a bit tame in comparison, but pleasant nonetheless.

Overall, I enjoyed these After Eight desserts but feel they were a bit too "safe". Some real dark chocolate or actual mint crème from the centre of an After Eight would have gone a long way to making them more exciting.