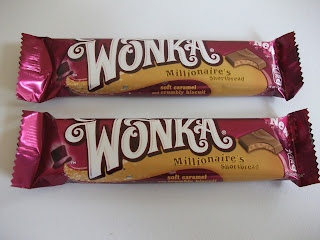 The relaunch of the Wonka brand in the UK was announced only a few weeks ago - to much controversy (apparently the calorie content in these bars could have a "devastating impact on children"!) - so I was very surprised to see these Millionaire's Shortbread bars in a newsagents recently. Oddly, they didn't have the "Chocolate Nice Cream" variety which was also supposed to be launched along with this bar. 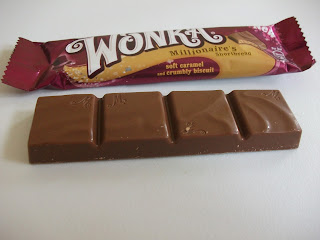 The bar is described as "Milk chocolate with a caramel filling (50%), containing biscuit pieces (6%)", and contains vegetable fat in addition to cocoa butter. It's quite thin and comes in 4 blocks which have the Wonka "W" printed on them.

The press release describes this bar as "Just like the classic sweet treat: it's the tasty combination of delicious caramel and shortbread pieces covered in smooth milk chocolate". What's confusing though is that this bar doesn't contain any caramel whatsoever - or at least caramel as most of us know it. True caramel is supposed to be gooey, but this bar contains some sort of caramel flavoured "paste" filling, similar to what used to be in the now-discontinued Kitkat Chunky Caramel. I cut the bar into several pieces thinking perhaps the caramel was hidden in one of the other blocks...but alas, no caramel! 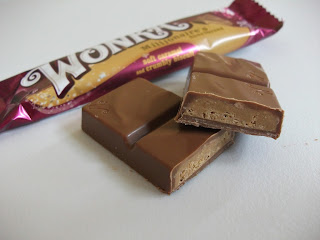 Taste-wise, the bar was nice but very sweet. The biscuit pieces were very crunchy, but I couldn't detect much flavour from them as they got a bit lost in the taste of the filling. They did add a nice texture though. The "caramel" part of the bar is a sweet, caramel-flavoured filling. It wasn't unpleasant at all - infact it was very rich and tasty - but considering this bar is supposed to contain actual caramel I couldn't help but feel a bit shortchanged! It was nothing like any millionaire's shortcake I've ever eaten that's for sure. The chocolate itself was Nestlé's typical milky chocolate - it tasted nice enough but wasn't particularly distinctive. 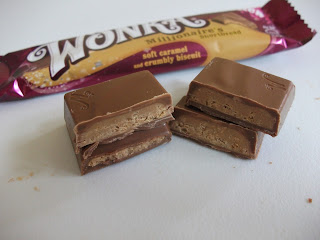 Overall, I was disappointed by this first bar from the new Wonka range. It's tasty enough, but not particularly unique or "scrumdiddlyumptious". I think the oompa loompas need to go back to the drawing board with this one - Willy Wonka would be embarassed!

After trying this bar I can't say I'm all that excited about the "Chocolate Nice Cream" or "Crème Brûlée" varieties in this range, but hopefully they might be an improvement!