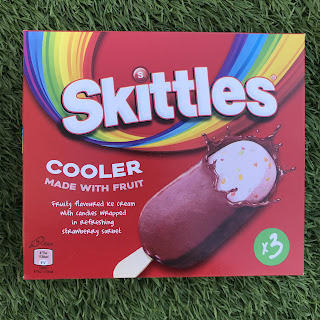 I must admit when I first heard about these new Skittles Cooler ice creams being launched I was a little skeptical. They sounded a bit sickly and I just couldn’t imagine Skittles of all sweets working as an ice cream. Boy was I proven wrong!
I spotted these for £3 for three sticks whilst in Tesco - who have loads of new ice creams in at the moment such as Tesco Rainbow Cones and Kinder Bueno Cones - and straight in my basket they went. They’re fruit flavoured ice creams with crunchy skittle pieces mixed in, covered in a strawberry coating. 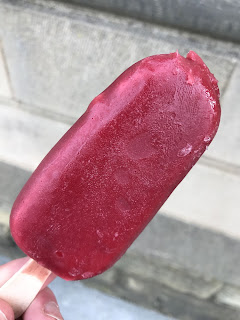 They look a bit like a Solero and that’s the general idea of the coating - a sorbet like fruit pulp mixture. It’s pretty tasty and a good start to the fruity sweetness that lies below... 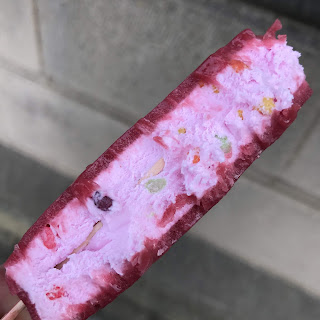 Yes, not only is the actual ice cream fruit flavoured but also it contains little crunchy Skittle pieces! They were in different colours of course and look super cool embedded in the ice cream. And they really make it something unique - the ice cream itself has a fruity flavour that is pleasant enough but the Skittle pieces are the star of the show -  they bring that unmistakable Skittles taste and texture we all love. Although that said, they were perhaps a bit crunchier the real Skittles - I think they’d been coated in extra sugar, perhaps for some technical reason since they’re in ice cream.
All in all, these really surprised me in being better than I expected and it’s mainly due to the skittles themselves. Having crunchy sweets in an ice cream is so novel and the fact that it’s Skittles just takes it to the next level. The actual ice cream and coating is  good, although I do think they missed a trick not using different coloured coatings to fit the Skittles theme even more.
10/10.
Allergens: contains milk. Suitable for vegetarians.