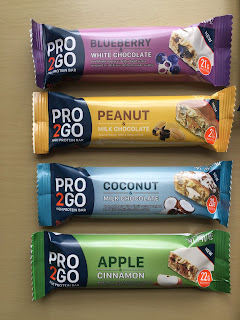 A big thankyou to Sci-Mx Nutrition for today's review; they recently sent me some interesting products from their new protein bar range to try. I'll be reviewing their Protein Bakes crisps shortly but today I'll focus on the bars. There's 4 different flavours, each with a soft liquid centre. The protein comes from whey crisps and hydrolyzed collagen, and the sweetness from maltitol and sucralose.

I thought I'd start with one of the more unusual flavours, an Apple & Cinnamon bar with a white chocolate coating, sweetener and an apple and cinnamon flavour centre. Opening the wrapper it had a nice cinnamony sweet aroma, and there was a hint of apple there too. It smelled very inviting. 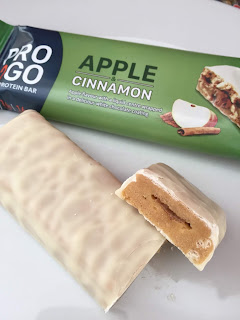 The chocolate coating is thin, but does a nice job of recreating a milky white chocolate flavour. The centre is quite creamy, almost fudgey with a distinct apple and cinnamon taste that was quite yummy indeed. You can taste the protein in there and it's pretty inoffensive. The liquid filling adds a nice sweet, cinnamon touch and the gooeyness enhances the texture further. The protein crisps are nestled into the filling and pretty crunchy, making for a mix of chewy and crispy textures. All in all, pretty yummy stuff! 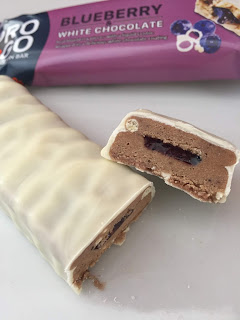 Again the filling is quite dense and fudgey, with the protein flavour being noticeable but not too overpowering. The blueberry is the star of the show, and most of it comes from the liquid centre. It's sweet and very tasty, combining well with the creamy flavour of the white coating. Again the protein crispies give a nice textural contrast to the fudgey filling. Pretty delicious, although I think I preferred the Apple & Cinnamon one more. 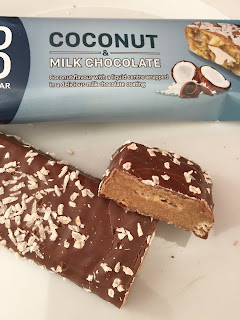 The Coconut and Milk Chocolate variety contains a coconut flavour centre, coated in milk chocolate with a liquid filling and sweetener, it's also topped off with dessicated coconut. This one certainly had a strong coconut aroma, the the taste of coconut was predominent on biting into the bar. It's very nice indeed and makes a change to have a milk chocolate variety from this range. It didn't quite wow me as much as the fruity flavours but I still enjoyed it for what it was - somewhat like a higher protein Bounty bar. 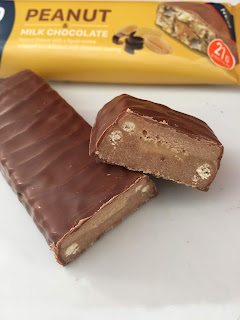 Last but not least, the Peanut & Milk Chocolate variety. This is described as peanut flavour with a liquid centre wrapped in a delicious milk chocolate coating, and had a nice strong nutty aroma when I cut into it. I was hoping for a higher protein version of a Snickers!

Biting into it it did somewhat remind me of Snickers, there's the fudgey nougaty taste and texture, with the liquid centre adding extra peanut flavour. The protein crisps of course enhance the texture with some crunchiness that contrasts nicely with the fudgey filling. It's all very tasty indeed and definitely felt akin to eating a Mars or Snickers.

Overall then, for a range of interesting Protein bars I have to say this is a good selection. They don't taste overpoweringly of protein like some protein bars can, and the unique flavours and textures make them a lot more interesting than your average bar. If I were to choose one to return to regularly it would be the Apple and Cinnamon, but the Blueberry is pretty unique too and I could see it being a fave in Summer time. The peanut one also made for a healthier take on a Snickers bar. I'd recommend these if you need a handy protein snack!

For more info on the range and to buy, check out: https://www.sci-mx.co.uk/