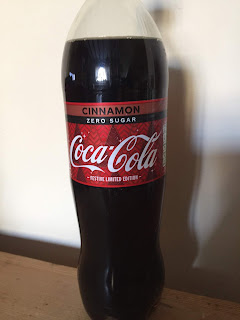 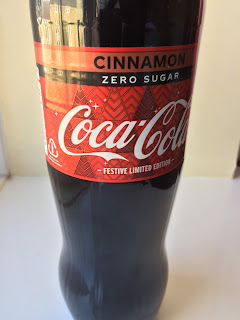 This is now available from both Tesco and Sainsburys, for £1.25 for a 1.25l bottle. If your locals aren't stocking it yet though do be patient - it's sure to turn up soon. Is it worth the excitement, is it as festive and christmassy as we are all hoping, I hear you ask...? 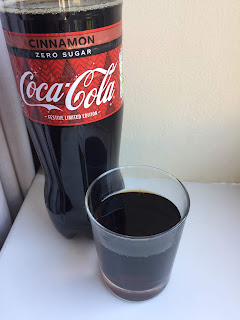 I was certainly very hyped to try this when I first heard about it - I've always liked cinnamon and spice flavoured drinks in Autumn, and pairing the flavour with Coca Cola sounded like a potentially great idea. It could have been a nice mixer for alcoholic drinks.

But sadly it was a bit of a letdown. It doesn't taste bad at all, it's a typically sweet, refreshing and pleasant Coca Cola drink that we are all familiar with, it's just that the cinnamon flavour is only barely there. At first I couldn't taste it, but then it hits you in the aftertaste; its very subtle and actually rather nice. But its just not strong enough, and doesn't justify the hype. Why they couldn't have made it stronger in flavour is beyond me...if Coca Cola are worried it might put people off, well people who don't like cinnamon are hardly likely to be buying this in the first place are they?

Overall, this is pretty inoffesnive and I'm sure it will sell on hype alone, but it's a shame they didn't go all out with it. I'll look elsewhere to get my spicy cinnamon fix...