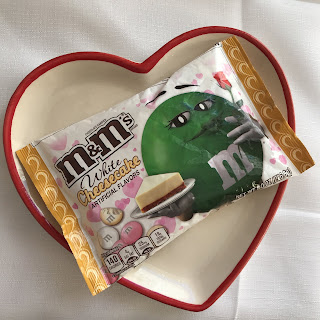 Valentines Day is just around the corner, and to celebrate it (early) I thought I'd treat myself to a bag of these White Cheesecake M&M's, which are available on various sites like Amazon, but I bought them off ebay as it was a few pound cheaper. Gotta love yourself! In true Valentine's fashion I poured them onto this heart-shaped dish that is a pretty reasonable £1 from Poundland. 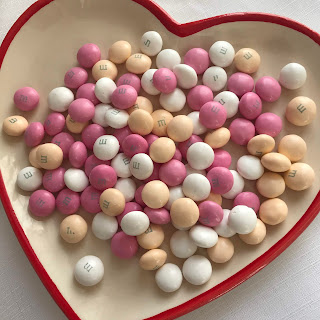 There's no description on the pack apart from "white cheesecake artificial flavours"...you gotta love how they're not ashamed to admit it! They come in white, beige and pink colours - pretty fitting for Valentines! They have a nice milky and slightly cheesecakey aroma. 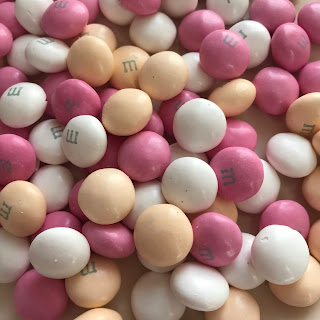 I'm sure the shells are a little different to UK M&M's, they don't seem quite as shiny or glossy, although maybe this is a change just for the Valentines edition. 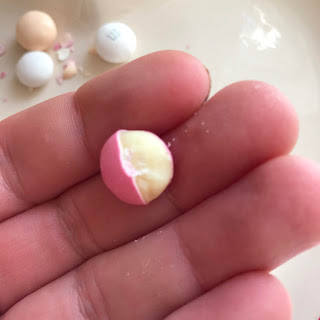 I wasn't quite sure what to expect but I am happy to say these did not let me down one bit - they are every bit as sweet, sickly, addictive, creamy, white chocolatey and cheesecakey as you could wish for! Granted, the cheesecake flavour isn't the strongest element, but it's definitely there and they have a distinct tangy cheese flavour, which may sound horrible but actually sets them apart from regular white chocolate. So, so addictive, I found it hard to stop munching on them! They were of course rather sickly which caught up with me eventually, but damn they are moreish.

After trying these it makes me even more sad that white chocolate M&Ms aren't more widely embraced by us silly UK folk. They poop over the milk chocolate variety from a grand height, and are the only ones that would make me eat M&Ms regularly if they were launched permanently. Whilst these aren't widely available, if you've ever considered purchasing a pack from online stores I would say... DO IT! If you love white chocolate or know someone who does, you won't regret it! The next on my list to try is the White Peanut M&M's...