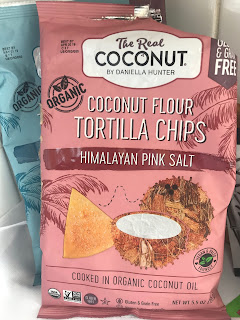 A big thankyou to The Real Coconut by Daniella Hunter for today's review. Daniella's recipes, products and restaurants are dedicated to digestive well-being and as such, these tortillas are grain free, suitable for vegans and gluten free. I was very excited to try them because these are such a unique product, they're like a healthier equivalent of Doritos, so if you have digestive issues or are following a paleo or autoimmune style diet, these might be the thing for you! Isn't it nice to include everyone? :)

The chips are made from organic ingredients, and cooked in coconut oil rather than sunflower oil, so there's less of the unhealthier omega 6 fats. They're also made with non GMO ingredients. Of course all that's irrelevant if they don't taste the part, and luckily they're pretty darn addictive! 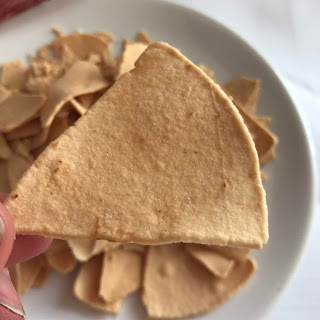 I started with the Himalayan Pink Salt variety which is made with coconut flour, cassava starch, coconut oil, xanthan gum, kosher salt and Himalayan pink salt. Taking a bite, it's super crunchy but unlike Doritos it's also very dense and filling, meaning you don't immediately eat it and reach for another. It kind of forces you to chew for longer (maybe the extra fibre from the coconut) and the coconut oil makes it feel more satisfying than sunflower oil. The pink salt is the perfect seasoning, not too intensely salty and compliments the savoury tortilla taste. Whilst these are indeed addictive, they fill you up at the same time which felt kind of odd - even though my mind wanted more, my stomach said no! Haha.

All in all I think these are a fantastic snack especially if you're following a gluten free, grain free type of diet for digestive health. I'd definitely buy these again as I think they'd keep my energy going for way longer than similar alternatives. 8.5/10. 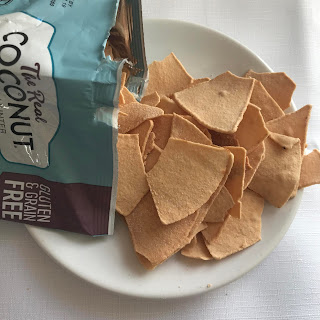 The Sea Salt and Vinegar flavour has the same ingredients but with the addition of maltodextrin and white distilled vinegar. Now I'm not a big fan of maltodextrin, but I guess it's to stabilise the seasoning so I'll let them off. These ones are good, with a potent vinegar flavour, although I found it was a little too strong at times. I didn't like these as much as the Pink Salt flavour. 7/10.

Overall, these grain free tortillas get a thumbs up from me - even though I didn't like the vinegar ones as much I guess that's just personal preference. A spicy chilli or curry flavour might be a nice variation. If you're vegan, gluten free, grain free or following a paleo diet I'd recommend checking these out!

For more info on the range see: