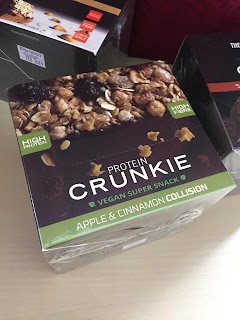 Another review of The Protein Works today, following on from the Salted Caramel Protein Cookies today it's the turn of their Protein "Crunkies", which are not only gluten free but vegan. Hurrah! They're made with a mix of oats, sucralose, corn fibre, apple, sultanas, rice crispies and soy protein. 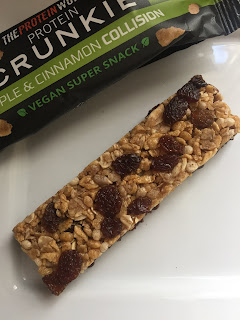 So why are they called Crunkies? Beats me - they're pretty much cereal bars! There's a dark chocolate flavour coating on one side and the other side has raisins clearly visible. 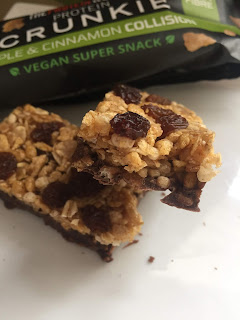 And they taste pretty good! The apple and cinnamon flavour is unmistakable, and gave me that warm feeling of autumn when cinnamon flavours are more common. Of course it goes perfectly with the raisins, as well as the rice crispies and oats. The dark chocolate coating adds a nice touch although I didn't feel it was necessary - the bar is nice enough as is.  All in all, this is a sweet and satisfying bar and the perfect snack for after a workout (if that's your thing!). It's filling thanks to the soya protein, but also feels like a treat.

Overall, if you're vegan and in need of a workout snack I would highly recommend these. They're one of the few vegan and dairy free protein snacks I've come across (let's just forget the horrible Paleo Protein Espresso bar!), so are pretty unique in this area.

Check out The Protein Works range at www.theproteinworks.com.