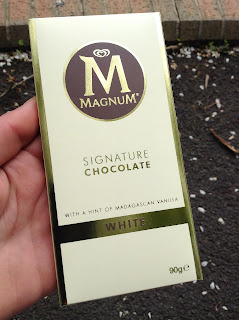 Whilst perusing B&Ms range of imported snacks recently I spotted some new guys on the (chocolate) block (har har!). Magnum have now launched their signature chocolate in white, milk and dark varieties. By signature chocolate, they of course mean the chocolate used on their Magnum ice cream sticks. 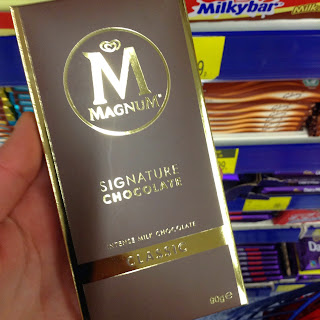 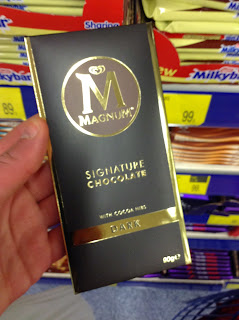 Initially I couldn't decide which one to go for - I wanted to try all three but that'd be greedy! - so I went for the White since it's always been my favourite Magnum. Like the sticks, the chocolate contains Madagascan vanilla extract and vanilla bean pieces. 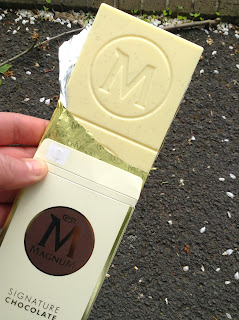 Opening the wrapper, I was surprised to find the chocolate split into two huge blocks. Which is probably just about right...one block is the perfect size for a creamy sweet hit! Both had the signature "M" stamp printed on. 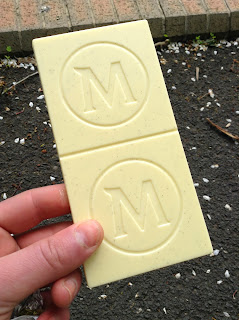 The chocolate tasted delightful, it's that same creamy, vanilla flavoured chocolate you get on a white Magnum, but in a more intense and concentrated form. The vanilla makes it more moreish than it probably should be, but it's intensely sweet. The creaminess is very soothing, and after scoffing one large block I felt very satisfied, so much so that I saved the other one for later...something I rarely do!

Overall, this is great chocolate and tastes the same as that on a Magnum, so if you've always loved the chocolate on Magnums you may want to give this a try! That said, with it being nearly summer I think it'd be better to buy the real thing!
RATING: 8 out of 10.
Price. 99p at B&M bargains (90g bar). Suitable for vegetarians.
Magnum White Chocolate