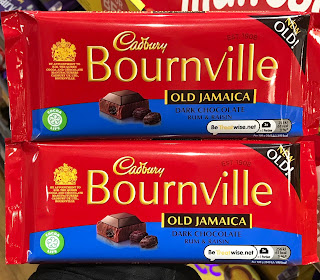 This is a bit of an oldie from Cadbury, albeit one that has come and gone in various formats over the years. With the success of their Bournville with Orange bar, and Veganuary in full swing, they've relaunched their classic Old Jamaica Rum and Raisin chocolate. I last remember seeing this around 2011 or so, when it was launched along with the Orange variety as a limited edition. Here's an old pic from chocablog: 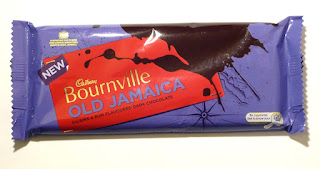 Before that I've been told it used to be available in thinner bars, a bit like Lindt bars. I certainly don't remember that version! 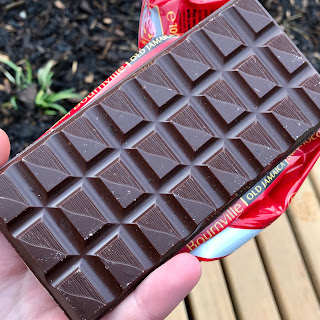 I found this in Wh Smiths near the tills for £1, which is standard for a 100g bar like this. Opening the wrapper it has the newer Bournville block design - somewhat square with half of the block having grooves on. I'm not too keen on the design to be honest, it doesn't break off very cleanly. Nevermind though. 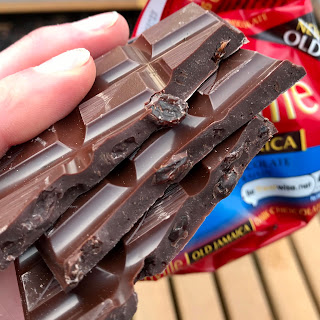 It has a strong albeit artificial rum aroma. Which is what you expect from something like this really isn't it?

It's a semi sweet dark chocolate, not truly dark chocolate since the cocoa solids are around 39% but I did enjoy it for what it is. The raisins are plentiful but slightly overpowered by the strong rum flavour. Whilst it's definitely artificial, I liked it, it gives the bar the classic nostalgic taste that you'll love if you like rum and raisins chocolates. It's an acquired taste though - I suspect older generations might be more keen on it than the young 'uns!

Overall, it's great to see a return of a classic bar like this from Cadbury! I hope they continue this tradition - it would be lovely to see bars like Mint Crisp, Three Wishes etc on shelves. Apparently this one had tons of requests to be brought back so it seems Cadbury have listened!

Suitable for vegans, but made in a facility with milk so it may not be suitable for those with a milk allergy.