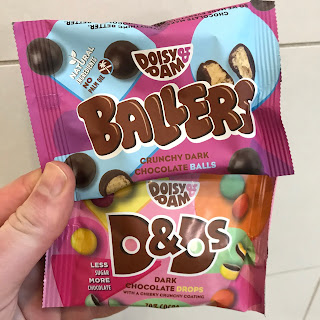 I was quite intrigued when Doisy and Dam announced some new snack products for Veganuary recently, the dairy free, gluten free vegan Ballers, D&D’s and Buttons range that you can now find in Holland and Barrett stores (99p per 30g bag, £1.99 per 75g bag). There’s also some Dark Chocolate Vegan Mini Eggs joining the trio in time for Easter.

Unfortunate names aside (Ballers? They must have seen the jokes coming with that one - I’m sure it’s not unintentional!), these are a great idea in theory as they’re meant to be like Free From versions of Maltesers and Smarties for vegans. But there’s a catch...they’re made with dark chocolate rather than a vegan “milk” alternative so are inherently a more marmite product to start with - not everyone is a fan of dark chocolate, and I imagine that doesn’t suddenly change if you’re vegan.

And that’s why these products fail. Now personally I enjoy dark chocolate, especially the more flavoursome varieties, so I assumed I would like these. But both products were pretty terrible in my opinion. 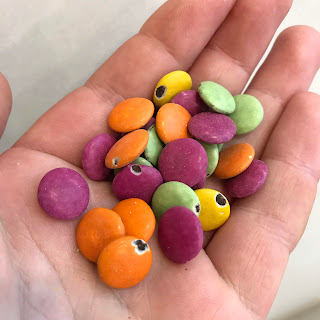 Starting with the D&Ds, I was expecting sugary sweetness from the shell perhaps giving way to a richer more adult dark chocolate flavour. But the shells tasted...I can’t describe it exactly...sort of vegetable-y? Not what you expect from coloured crunchy sugar. They give way to a bitter dark chocolate that makes the experience even more unpleasant. They were so bad - This was one of those few occasions I didn’t enjoy chocolate or want to finish it! 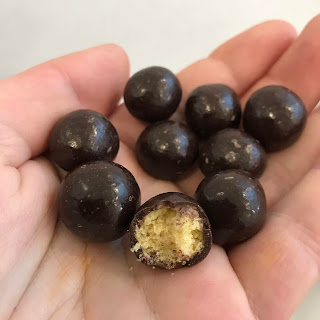 The Ballers tasted a little better thanks to the crunchy cereal ball fillings, but it’s SO mismatched with the bitter tasting dark chocolate coating, it just doesn’t work at all. I would rather have eaten them as uncoated cereal balls! They’re nothing like a Malteser either, just bitter coated cereal bites.

Overall then, all I can say is what a let down. I’m surprised to be honest. There’s clearly a gap in the market for a vegan version of classic chocolates (look at the success of Vegan Galaxy bars) so I don’t know why this wasn’t executed better. Using a nice creamy vegan milk chocolate would have been an excellent start - there’s plenty to choose from now. I expect we will see more products like this in the near future, so I’ll wait until something nicer comes along before venturing into vegan confectionery like this again!