Nestlé Aero Bubbles have changed! (plus some history)

- May 01, 2013
When Aero Bubbles were first launched in 2005 they had a duel green and milk chocolate shell with a milk chocolate mint flavour centre. Here is a pic (courtesy of the brilliant snacks archive on chocolatereview.co.uk):

Then they changed the centres to being green coloured, with a milk chocolate shell (this pic is from Jim's Chocolate Mission who reviewed them back in 2008): 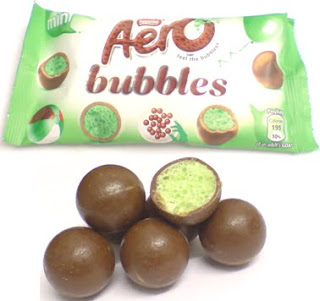 Now, Aero Bubbles have made the full transition to a duel milk and green shell, with a bubbly green mint centre!:

Confusing huh? Presumably the reason they initially changed them was because they're cheaper to make in all milk chocolate. But the charm of Aero Bubbles was always the duel green and milk chocolate shell, as well as the addictive minty taste.

And make no mistake, they are as delicious and addictive as they always were! They taste creamy, and refreshingly minty but not overpowering. The bubbly texture makes them light and moreish and I soon munched through this little bag, although to be fair it didn't contain many!

Overall, I don't get why Nestlé changed these so much, but at least they saw sense and ditched the "all milk chocolate" version. Curiously, the bag doesn't state how many grams it contains, so I wonder if this is because of a stealth reduction in size. I feel some snacks detective work calling me...

At least they haven't had the audacity to put a "New!" label on them like some companies do! (for a funny take on this phenomenom, see Grocery Gems fantastic post "Who knew it was not so new?" here: http://grocerygems.blogspot.co.uk/2013/02/who-knew-it-was-not-so-new-review.html)