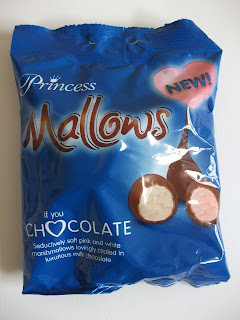 Whilst in Tesco recently I spotted these Princess Mallows on offer for £1. I've never tried chocolate coated marshmallows before so was rather curious to see how they would taste. 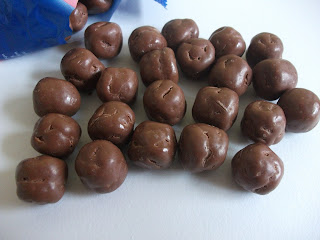 I wasn't expecting much but to my surprise they turned out to be moreishly tasty! The bag contained white and pink coloured marshmallows with a nice thick coating of milk chocolate. They had a slightly glazed appearance and looked a bit like pieces of chocolate-coated popcorn. 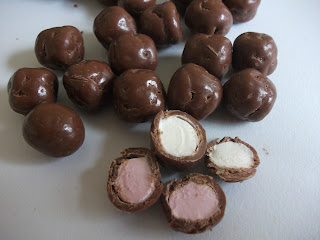 Taste-wise they were very, very moreish. They were sweet with a lovely vanilla-hinted flavour and a nice chewy texture. The milk chocolate coating made them all the more addictive; it's described on the pack as "luxurious" and although I wouldn't go that far in describing it, it was still a tasty milk chocolate. It contains 29% cocoa solids which is higher than the average UK chocolate bar. I couldn't stop myself from popping these into my mouth one after another...there was something about the combination of chewy sweet marshmallow and chocolate that made it hard to stop!

Overall, these Princess Mallows are a fantastically moreish snack which I would highly recommend. They'd be perfect for taking to the cinema, although you probably won't want to share them!