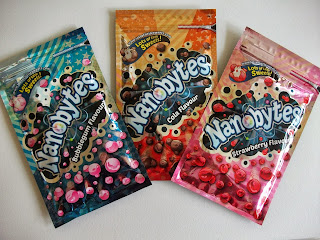 Some time ago, in a galaxy far far away... I was kindly sent some Nanobytes to review! Nanobytes are new space-themed chewy sweets from a company called Lots of Little Sweets. They come in both large 65g pouches or smaller 25g pocket sized bags, in cola, bubblegum and strawberry flavours. They are gluten-free, suitable for vegetarians and GMO free. I was sent the 65g bags, and below are my thoughts on each flavour:


Cola: These were very tasty indeed, they had a slightly tangy cola flavour that reminded me of classic fizzy cola bottles. They were very moreish and I couldn't stop shovelling them in my mouth! I loved the chewiness of the nuggets, and there was something about their small size that made them all the more addictive.

Bubblegum: These surprised me in being my favourite of the three. The bubblegum flavour was very tasty and had an almost herbal, fruit-like taste that was very natural. I was surprised because usually bubblegum is quite an artificial tasting flavour. I loved them, and couldn't stop piling them in my mouth non-stop whilst watching a film recently!

Strawberry: These were my least favourite of the three as I found them rather sweet, although they were still very moreish and it didn't stop me eating far too many! My friend liked them more than me and said they were his favourite flavour of the three.

Overall, I have to give Nanobytes a big thumbs up because they tick all the right boxes for sweets like this. They're tasty, moreish, come in handy resealable packs, and make perfect snacks for watching a film with! They also have a fun theme which kids will love, infact there's a story about how they came to be called Nanobytes:

Some time ago, far far away in space… The sky was filled with edible planets drifting dangerously close to the stars. Planet Nano was made up of 3 earth-shattering flavours: Strawberry, Bubblegum & Cola. When Planet Nano collided with a star it exploded; Filling the sky with lots and lots of little sweets. Project-Nano Astronauts were sent out to collect these rare and delicious chewy sweets, and now they’ve brought them back home to Earth, for you to enjoy the delicious flavours too.