Blast From The Past 2: Nestlé in the Noughties - ft. Irish Cream Rolos, Sticky Toffee Aeros & More! 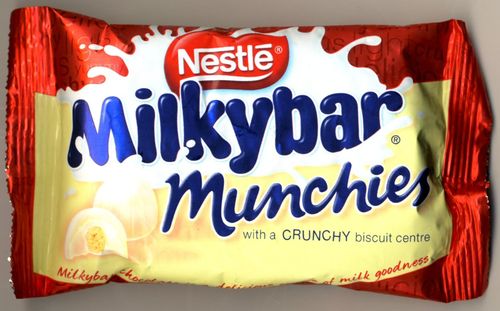 As promised in my first Blast From The Past post, here is part 2 featuring many other product spinoffs Nestlé did in the mid 2000's. During that time they had brought in a new manager whose strategy was to flood the market with lots of new products. It was rather similar to the endless new product releases from Cadbury, the only difference being that many of these products went unnoticed due to limited distribution.

If you remember any of these yourself please do get in touch via the comments! 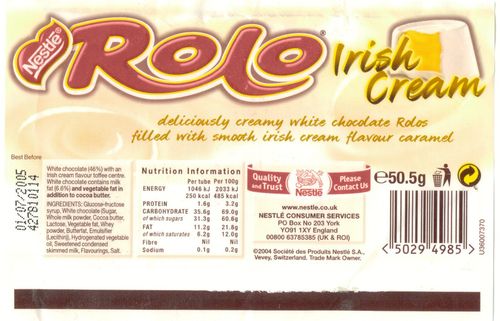 These were a bit sickly sweet, as I recall, and didn't have a strong irish cream flavour, but made for a nice change from regular Rolos! 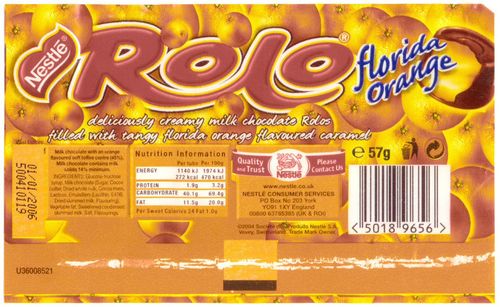 These contained orange-flavoured caramel. They were interesting but the orange flavour wasn't very strong. McDonald's did a Florida Orange Rolo McFlurry when these were available which was nicer than the actual chocolates! 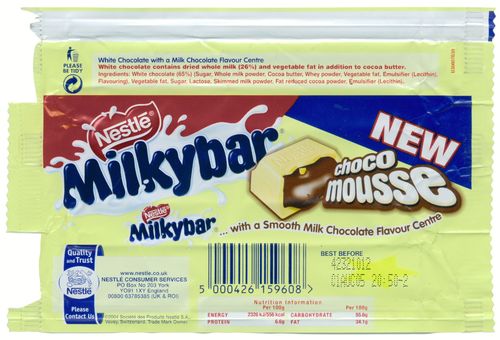 These were available in 2004 and contained a chocolate-flavoured mousse filling. They made a nice change from regular Milkybars, although weren't particularly memorable.

This Aero contained a butterscotch flavoured bubbly centre. They were extremely sweet, but I rather enjoyed them. The bars were much larger than a "large" Aero is nowadays!

This Aero contained an Irish Cream flavoured bubbly centre, which I found rather sickly. 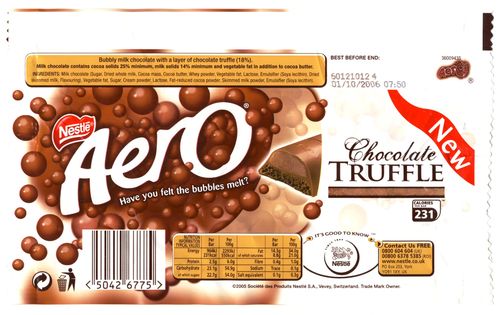 This was a rather pointless bar that contained a bland tasting truffle sat above a base of regular Aero chocolate. 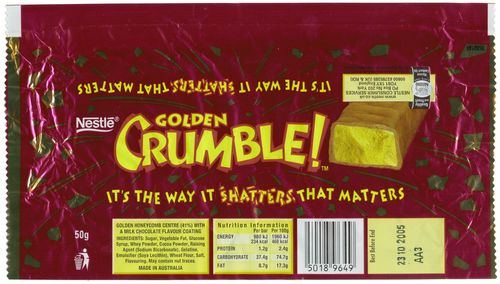 In 2005 Nestlé brought the Australian classic "Violet Crumble" to the UK to compete with Cadbury's Crunchie, but renamed it as "Golden Crumble". It didn't really take off, and I'm not surprised because it didn't use real chocolate - just a fake chocolate-flavoured coating.

These were available during the early 2000's and were one of my favourite Milkybar products. They were a simple combination of crunchy shortcake biscuit pieces coated in creamy Milkybar chocolate. Nestlé tried to market them as being for adults rather than kids - anyone else remember those funny adverts?

I overlooked this Kitkat flavour in my last Blast From The Plast post - they were a Summer limited edition available only in a 2-finger format, and consisted of regular Kitkat wafers coated in white chocolate with strawberry flavour chocolate marbled into it. They tasted okay, but skimped on the strawberry flavour a bit so were ultimately disappointing! 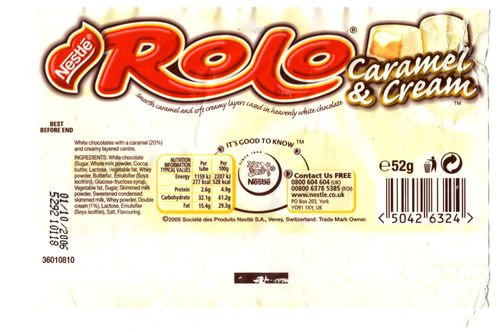 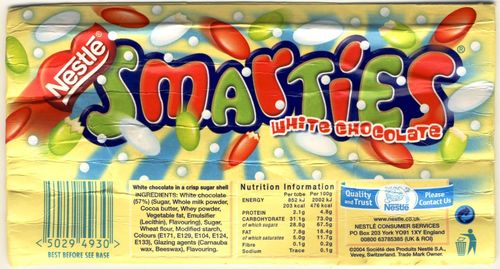 These were ace and far nicer than milk chocolate Smarties! I remember them being on special offer in Woolworths at 4 packs for a pound (back in the day when you could still get 4 chocolate bars for a pound!). They were a limited edition for Christmas 2004. 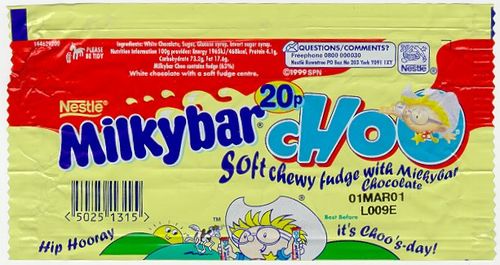 Last seen in the early 2000's, I don't know why Nestlé discontinued these - they were ace! They tasted like a Milkybar version of Cadbury Fudge, but much creamier. 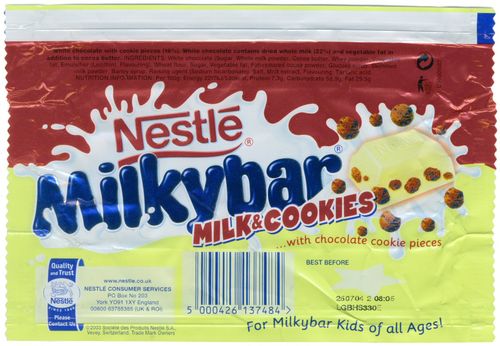 I don't remember much about this bar but it was apparently available in the early 2000's in some discount stores. I'm not sure if it was an official release or an imported product. 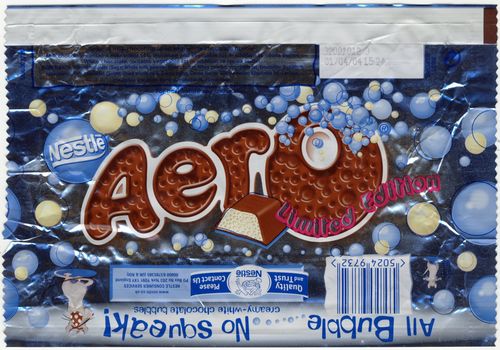 A white chocolate Aero centre coated in milk chocolate. They were nice but nothing amazing. 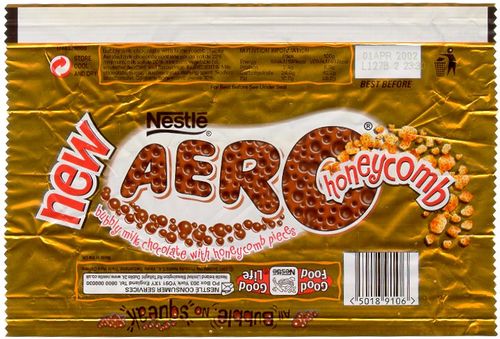 These were nothing special, but I'll always remember the adverts for them with the mouse! 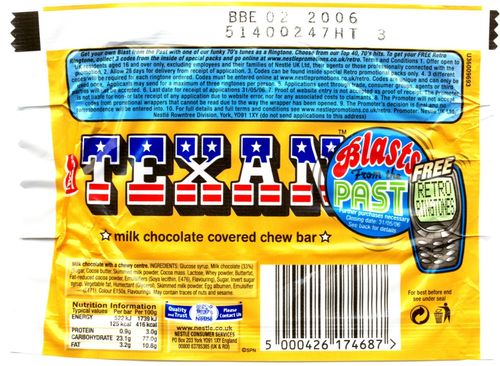 Nestlé relaunched the Texan bar briefly in 2005 as part of a Blast from the Past range which included retro wrappers on several other products. It didn't last for long and I'm not surprised - it contained overly chewy toffee and bland tasting milk chocolate. 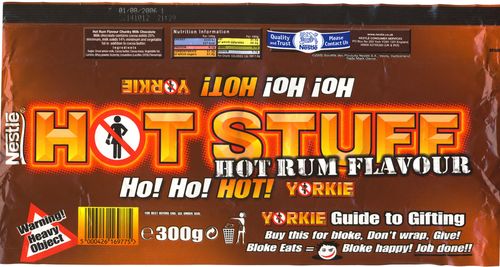 This was a rum flavour Yorkie bar brought out for Christmas and only came in a large size. It had a horrible artificial flavour that was very unpleasant. 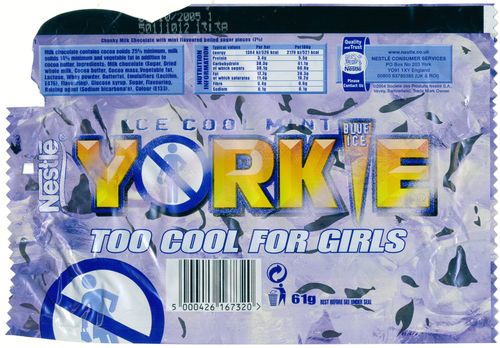 This Yorkie contained blue-coloured crunchy mint chips, and was surprisingly tasty! I'm not sure about the strapline though...I don't think they'd be able to get away with that nowadays!

Another minty product Nestlé did for a while were these liquid-filled Polo Orbs. They were a very odd concept and unsurprisingly didn't last for long! The packs contained little gel capsules filled with an intense mint-flavoured oil, and were basically the sweet equivalent of washing machine gel tablets! I always remember trying this Munchies Bar, which I was once given as a birthday treat. I loved it! Back then Nestlé Munchies were great chocolates with soft tasty caramel and crunchy shortcake biscuit, and this bar version was even nicer than the regular ones! Unfortunately it was only available very briefly.

Available around 2006, these were meant to be a Summer spinoff, but didn't last for long. They were very nice as I remember!

These were rather sickly and only lasted for one Christmas. Apparently they are still produced in other markets but are combined with mint flavour.

Nestlé did a spinoff Quality Street product called Pizazz in 2006. They contained flavours such as cookies and cream and were marketed as being more modern than regular Quality Street.

These were stick-shaped versions of After Eight which contained a greater amount of mint creme filling than regular After Eights. They were marketed as being suitable for dinner parties.

These were only available for one Christmas and contained a Grand Marnier liquer flavoured filling.

These were around very briefly, and were honey-flavoured crunchy bites coated in Milkybar. They were too sweet as I recall. This small pic is the only one I could find online.

Milkybar Raisins: These were also only available briefly and were basically raisins coated in Milkybar chocolate. They were marketed as being "healthier" and for kids. I can't find any pictures online unfortunately. These too were only around briefly, but a Polish version has since made a return in many discount stores, alongside the fantastic White Chocolate Lion Bar!

These were interesting. They were marketed at women using what Nestlé called "girly logic", with phrases on the packets such as "I'll just have one and save the rest..." and "It contains fruit so it must be healthy". They didn't last for long, and the products were quite rubbish and overpriced. The range included a lemon cheesecake bar, coconut and white chocolate wafer bites, and raspberry yogurt bites.

These were really nice, they were classic Milkybar chocolate eggs with a tasty strawberry mousse filling. I don't know why they stopped making them!

These were a bit pointless - a bag of regular mini Rolos that also contained nuggets of chocolate-coated honeycomb.

These were available more recently but have now been discontinued. They were basically a white chocolate version of Minstrels, and are similar to the white chocolates found in Vice Versas but without the dark shell.

Well, that's it for my second Blast From The Past post! I hope everyone has enjoyed reading and hopefully you've seen some products you may remember... or perhaps some interesting ones you've never heard of!

I'm hoping to feature some of Cadbury's various product spinoffs and limited editions throughout the years for Part 3 (including a Lemonade flavoured Crunchie bar!), and eventually I'd like to write about products from the 80's and 90's. Yes - I'll be delving deep into chocolate history! If there are any bars you remember or would like to see featured, please don't hestitate to get in touch! :)

*Credit to chocolatereview.co.uk for most of these images, plus ciao.co.uk and snackspot.org.uk
Blast From The Past Nestlé