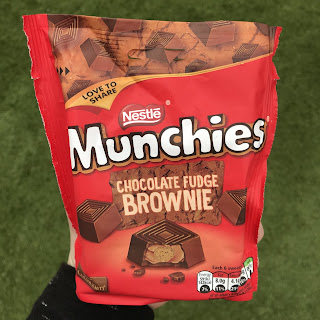 Recently, folks got rather excited when two new Munchies varieties were announced by Nestle: the first being today's review; Munchies Chocolate Fudge Brownie, and the other being Cookie Dough. They're possibly the first new products from Nestle in a long, long time (maybe since the Munchies Bar in the 90's?) so this was indeed quite exciting news!

The Chocolate Fudge Brownie variety had me rolling my eyes initially, because it sounded like it would just be chocolate flavoured caramel. However it turned out to be quite different - they've removed the caramel and replaced it with a chocolate fudge mixture! And in my opinion this is actually a good thing as it makes these a bit different. 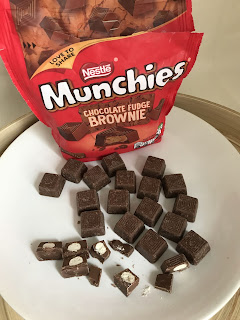 The Munchies look like the regular ones, but cutting them open reveals the fudgey chocolate filling with the classic biscuit centre in the middle. 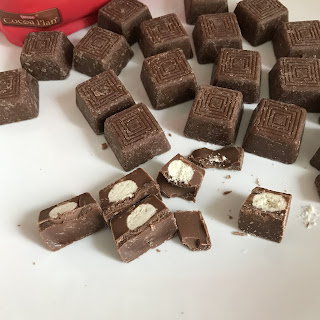 I have to admit it does look a bit wrong without the caramel - that's what makes a Munchie a Munchie, after all! It's a shame they couldn't have added caramel in there with the fudge filling too. 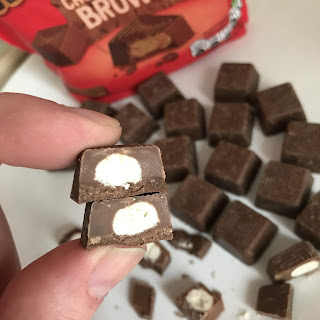 Still, grumbles aside I rather enjoyed these! There's no actual brownie of course - instead it's the fudgey filling that replicates the fudgey texture of a brownie, and it's pretty spot on. It does make them more chocolatey than a regular Munchie, but it's a nice switch up from the sickly sweet caramel filled regular variety.

Overall, I rather enjoyed these and think it's great they've switched things up. I would like to have seen caramel in there too but I guess there's probably production issues involved with that. I honestly don't think these will stick around on shelves though, as most people will probably miss the caramel, but I think they're a nice novelty as a limited edition. Maybe next they could do a white chocolate variety...please, Nestle?!