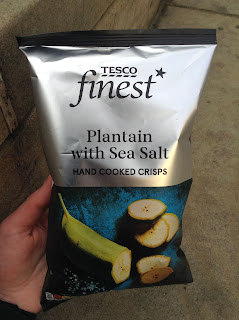 I'm a quite the fan of plantain chips, and often buy the various flavoured varieties now available from the likes of Tesco and Morrisons, such as spicy, garlic etc. They're usually found in the World Foods sections, so it's nice to see Tesco bringing them more into the mainstream under their Tesco Finest brand. I assumed these were part of their Christmas range but they're situated amongst the other "posh" bags of crisps rather than in the Christmas aisle, so I'm guessing they must be permanent. They cost £1.25 for a 125g bag, are hand cooked, suitable for vegans and made with plantain, sunflower oil and sea salt. 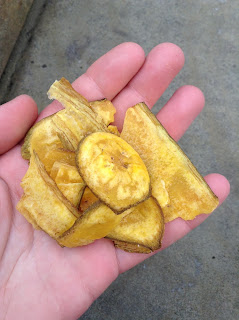 They're pretty tasty, but I found them inferior to the other bands of plantain crisps on the market. They're a little oily, probably due to the fact that sunflower oil is used rather than the palm oil in other brands. Now I know palm oil is a big issue due to deforestation - but most brands that do use it will use sustainable palm oil. Frankly, it gives a far better taste and crispness than sunflower oil does. These plantain crisps are okay, but in comparison to the other brands they lack flavour and taste too oily. I'm not sure I'd buy them again to be honest, which is a shame because they're in such a convenient large pack!

For what it's worth - these Samai Salted Plantain Crisps are my favorite brand and are available in most large Tesco stores (look in the World Foods aisle - they're in the Caribbean section).