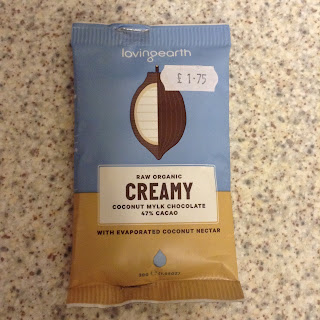 Today's review in honour of #veganuary is for something I hoped would be a bit of a treat for someone avoiding dairy. This bar, or rather heart is made in Australia by Loving Earth with coconut "mylk" as well as coconut nectar to make it somewhat of a vegan milk chocolate. I reviewed the Loving Earth Salted Caramel last year and enjoyed it, so was curious how this would compare to that bar.

Coconut nectar is the first ingredient, followed by virgin cacao butter, coconut, and finally raw cacao beans. The bar cost me £1.75 from a local vegan store. The ingredients are certified organic and fairtrade. 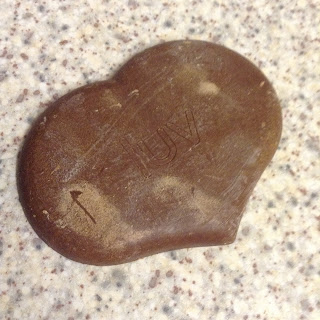 Opening the wrapper, I have to say I wasn't too excited by the dusty looking chocolate. I don't know if it's a "blooming" effect or caused by being transported from the other side of the world but it didn't look great. Still, the heart shape is a nice touch so I'll let them off.

Sadly, I can't say I enjoyed the taste. The texture is rather greasy and fatty, probably because cacao butter is so high in the ingredients list, which would usually be a good thing but it's just too overwhelming. The coconut nectar isn't sweet enough to compete with it, and the overall flavour leaves something to be desired. Compared to the delicious Waitrose 1 Indian Ocean Coconut Dark Chocolate this is nowhere near as good.

Overall, I have to say this was a disappointment for me, but hopefully it's an anomaly in Loving Earth's range because I do like that they use high quality ingredients, and they do some interesting varieties such as Turkish Delight.