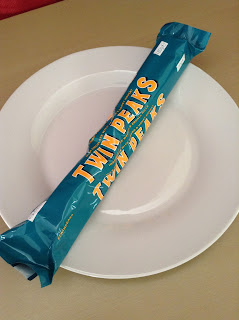 A while back, Poundland announced they would be launching their own honey and nougat chocolate bar similar to Toblerone called Twin Peaks, "inspired by the Wrekin and Ercall hills". Yeah right Poundland! It's obviously "inspired" by Toblerone and apparently Poundland ended up in trouble with Mondelez over the bar, hence why it's taken so long to appear on shelves. But they've settled their differences and the bar is now in Poundland for a limited period - featuring a turquoise wrapper to make sure no one confuses it with Toblerone, looking similar to Poundland's store logo. 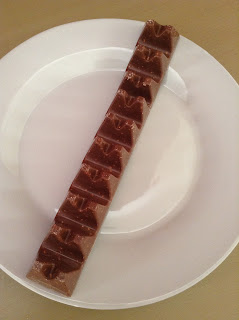 The bar weighs 180g - 20% more than a small Toblerone which is 150g, and more than Toblerone used to weigh before they bizarrely changed the block design last year. It's described as "Milk chocolate with almond and honey nougat (10%)" and is suitable for vegetarians. 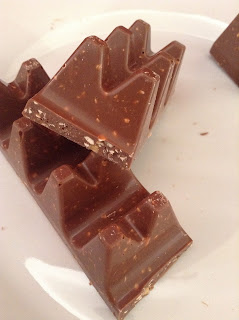 The main difference of course is the shape - "inspired by the Wrekin and Ercall hills" - it has a little dip in the centre of each piece. Thankfully there is no huge gap in between the chunks like in Toblerone bars. 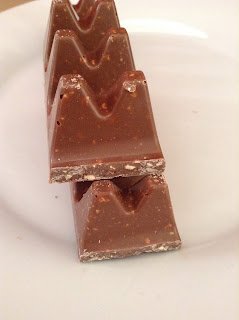 But how does it taste? Does it recreate the classic honey and almond nougat bars flavour? 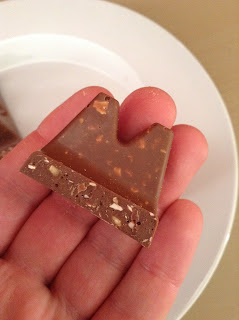 Sadly it doesn't. Its not a bad bar of chocolate at all, and is very satisfying to bite into, with some nice honey nougat crunchiness to chew on. But the chocolate doesn't have that distinctive rich "Swiss" flavour Toblerone does, it is clearly a cheaper version. However as far as knockoff chocolate bars go it's really not too bad and is good enough to justify buying instead of Toblerone, considering you're getting more for your £1 and the blocks aren't annoyingly spaced!

Overall, this bar is pretty decent and great value if you're on a  budget and want more chocolate for your money. I can imagine it selling well, that's if it sticks around - word has it these are only available in limited batches for a short time. Stock up while you can!