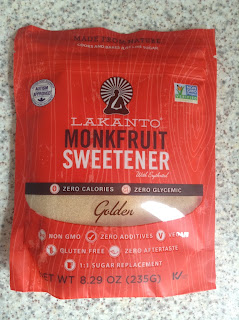 Today's review is something a bit different, not a snack as such but a sweetener that is fast becoming popular amongst the low carb, keto diet crowd. I've experimented on and off with low carb and sugar free diets and tried a variety of different sweeteners, such as stevia and eryhtritol, but I chose this one as it supposedly bakes like brown sugar. It's even been awarded "superior tasting natural sweetener" by America's top chefs.

It's based on an ancient sacred fruit, but rather than explain I'll copy what is on the wrapper:

"Over a thousand years ago, in remote mountain highlands of Asia, a group of Buddhist monks called the Luohan achieved enlightenment through meditation, prayer and pure living. On the slopes of a primeval forest, the monks discovered and cultivated a rare fruit prized for its sweetness. This sacred fruit was named Monk Fruit, or Luohan Guo, after its devoted caretakers and was used in elixirs to increase chi, or life energy. Monk Fruit was used for centuries in eastern traditional herbalism to increase chi and well-being, earning it the nickname “The Immortals’ Fruit.” We still grow and harvest Monk Fruit for LAKANTO® in the same pristine area and according to traditional and environmental methods".

Sounds impressive doesn't it?! Increase your chi, become spiritual, find enlightenment...all through a sweetener. But how does it compare to The Almighty white stuff? I'll get to that later... 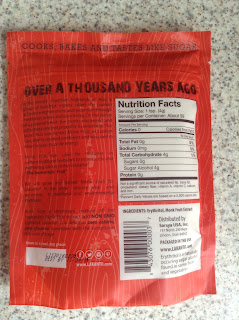 As well as being sacred, this sweetener is autism approved by the Autism Hope Alliance, non GMO, vegan, gluten free, contains zero calories and has zero glycemic index. It contains erythritol as well as monkfruit extract.

It looks similar to brown sugar in texture, and I initially used it in cups of tea. Although it is fairly sweet, I did find I had to use an extra spoonful to get the right level of sweetness. I suspected it would be better in baking so I tried using it in cookies, and they turned out rather well indeed, although the taste and texture is different from sugar. It's hard to describe really, but its definitely sweet and tastes more natural than any other low carb sweetener out there. I liked it; it's perfectly palatable and makes good cookies!

Overall, do I recommend this product? If you're on a low carb or sugar free diet, then yes, definitely! Its a lot healthier than real sugar and you can bake with it, which is the main point. However it may cause cravings for real sugar, so do exercise caution. I think it's great for occasional low carb baking, but maybe not for daily use. If you're not low carb but just want to reduce your sugar intake, then this is also a good product for you - it can be combined with real sugar to lessen the calorie load.

For more info on Lakanto: https://www.lakanto.com/