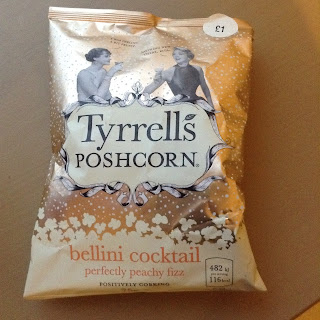 When I was informed via Instagram about this new variety of Tyrrell's Poshcorn recently, I just had to try it (I'm like that with new snacks haha!) so I hotfooted it down to WH Smiths. It costs £1 a bag and is gluten free, and also suitable for vegetarians and vegans. 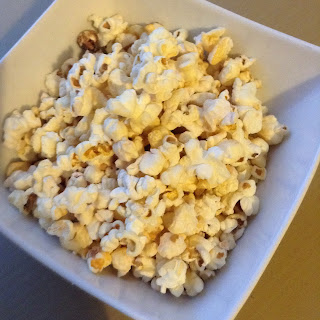 Alcoholic flavoured snacks seem to be the "in thing" at the moment, what with M&S doing Bucks Fizz flavoured crisps (review due shortly!), Aldi doing Gin & Tonic crisps, and not to mention the various mojito inspired popcorn varieties. So how does Tyrrell's fare?

The popcorn is described as tasting of "peachy fizz", which is what a Bellini Cocktail tastes like. Apparently. I wouldn't know as I'm not really a cocktail man! 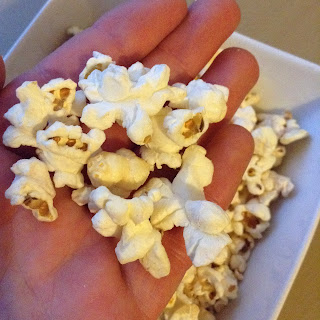 I poured the whole bag into a bowl, knowing that most of the flavour usually resides at the bottom. The popcorn definitely had a fizzy taste, almost like sherbet, but there was also an odd vinegary tang to it. I have no idea if this is what a Bellini cocktail is supposed to taste of, but I wasn't a fan of it. Looking at the ingredients, the flavouring contains dried peach juice, as well as dried white wine and dried chardonnay vinegar. Aha - that's where the weird sharp flavour is coming from!  Why they've included vinegar in a sweet popcorn is beyond me...maybe that's how cocktails roll?

Overall, I'm glad I tried this, it was an interesting experience but this is not a popcorn I will be buying again. If you're a fan of unusual popcorns though, this might be your bag!

7 out of 10.
Bellini Popcorn Poshcorn Tyrrells