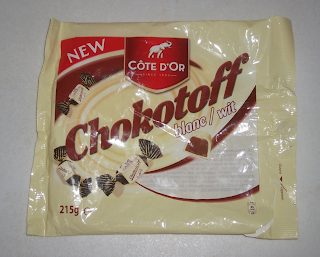 Here we have another Côte d'Or product review...you'd think I was obsessed with them or something! ;) Chokotoff are a brand of toffees popular in Belgium, and I found this white chocolate version of them in B&M bargains for £1. I don't have a picture of the actual toffees I'm afraid as I ate them all a few months ago, nom nom :)

They were quite tasty, the toffees are chocolate flavoured and work well with the creamy white chocolate, however they suffered the same problem as most toffees - they were too hard. I solved this by popping them in the microwave for 10 seconds; this made them softer and much easier to eat. I overdid a few and they turned into a melted mass of white chocolate and toffee, which was actually very tasty!

Overall I would say this is a decent product and I'd like to try the original dark chocolate version - hopefully I'll come across them some day.

Have you tried Chokotoff before? If so what did you think of them?
Chokotoff Côte d'Or