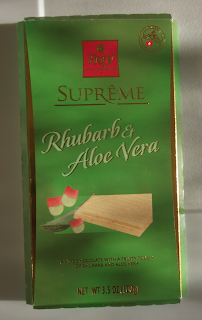 After seeing The Snack Review's recent posts on Chocolat Frey I thought it about time I did my own Frey review. This is quite an old product and I'm not sure it's around anymore, so this is mainly for archive purposes and to let people know this odd-sounding bar did indeed exist!

I bought this from Home Bargains back in 2007, and kept the wrapper as I often do with unusual chocolate bars I've tried. It cost around 50p and I was very intrigued because I've never heard of a combination such as rhubarb and aloe vera before.

To be quite honest, the taste wasn't all that nice, as far as I can remember. It was rather sickly and the rhubarb and aloe vera didn't really work with the white chocolate. If anyone has tasted aloe vera before you'll know that it has has an odd taste - to say the least - so combined with the flavour of rhubarb it was a very strange combination indeed.

However I love Chocolat Frey as a company because they try new things and I've had some very good chocolate bars from them over the years. Apparently they are the number one chocolate company in Switzerland, and new product variations account for 10% of their annual sales. Their range includes over 2,500 products in various forms, which is quite impressive!

Pet peeve here; but why is it that Europeans are so much more adventurous with their chocolate varieties than us Brits? All we ever seem to get are endless variations of hazelnut, caramel or wafer...it's so boring. Whilst rhubarb and aloe vera isn't the greatest combo, there's so many other interesting varieties that companies like Frey, Ritter and Lindt sell in Europe.

I've only ever seen Frey products in Home Bargains and other discount stores, however there's an article here suggesting they may officially launch their range in the UK, so fingers crossed for that.

I'll be archiving more Frey bars in the near future, so do stay tuned. Meanwhile Dave from The Snack Review is having a "Frey Week"; be sure to check out his reviews!
frey