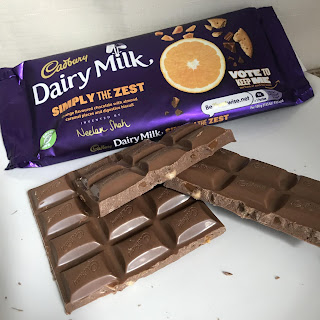 Amongst the other new flavours in the Cadbury Dairy Milk flavour vote (Choca-Latte and Raspberry Shortcake) the last one is this: Simply The Zest. I was very excited to try this as there's no orange flavour Cadbury bar currently on the market and also because Cadbury used to do a delicious orange flavour Dairy Milk many years ago: 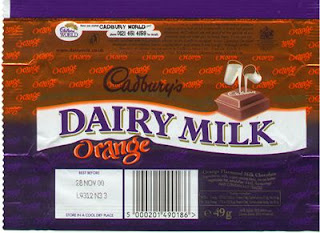 This Simply The Zest bar was described as orange flavoured in the press releases so I thought it might be similar to the Dairy Milk Orange, but alas it wasn't. Instead it contains orange pieces and shortcake pieces plus crunchy almond caramel. 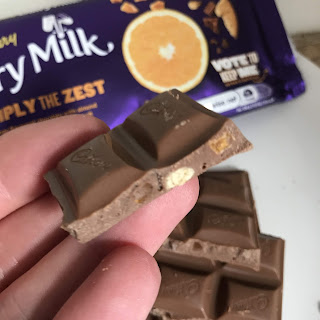 It's pretty tasty, of course! The orange pieces are like chewy candied orange, similar to what you get in the Cadbury Bournville Orange, and the caramel pieces are a bit like Daim. To be honest they get a bit lost with the other flavours and textures, the shortcake biscuits are nice and crunchy, and overall it's a mishmash of fruit and biscuit flavours. Like I said, pretty tasty, but ultimately it didn't seem like the best out of the three new flavours. I think had the chocolate been orange flavoured it would actually be nicer and more unique.

Do let me know in the comments if you've tried this flavour or the others from the new range!