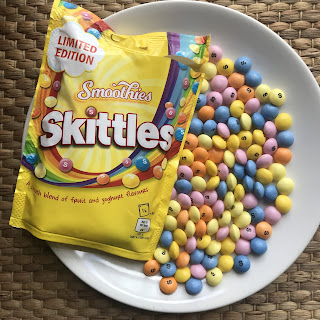 This seems to be the year for new Skittles flavours, and as well as the Skittles Dips Yoghurty Coated launched in Asda recently there’s also this new Skittles Smoothies Limited Edition. They're described as fruit and yoghurt flavoured Skittles and come in banana, pineapple, apricot, raspberry and blueberry flavours. They’re £1 a pack currently in Asda stores only. 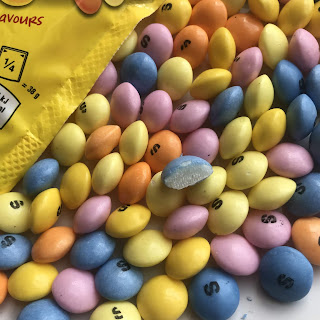 To be honest there’s not a great deal to say about them. They’re alright - they’re slightly creamier and less tangy than standard Skittles but aren’t quite milky or creamy enough to be called smoothie in my opinion. It’s nice to have some different flavours like banana, pineapple etc though.

Overall, not a bad attempt and it’s nice to have some variation in Skittles varieties, but the Yoghurty Coated Dips are far more interesting than these.