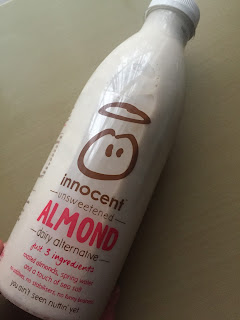 Innocent, famous for their bottled smoothies have attempted to branch out in a few areas in recent years. They've done things like vegetable juices and Fruity Spring Waters, but now they've launched their own range of vegan and dairy free Nut Milks, made with just three ingredients, and no stabilisers or thickeners. This is certainly a good move, since many who buy nut milks are tired of all the weird things added in brands likes Alpro.

I picked up this 750ml bottle for £1.99 in Waitrose, I think it was an introductory offer but I'm not sure. There was also a Hazelnut variety there and I believe Innocent make a Coconut version too.

Consisting of just almonds, sea salt and spring water, I didn't think there was much I would be able to say about this and I was right - it tastes as you would expect. If you've ever made nut milk at home this is pretty much the same thing, just pressed nuts and water. It has a slight marzipan-ish taste from the almonds and is good mixed in tea or coffee, but I think it would work best in smoothies or shakes as the consistency is a little thin. This is to be expected due to the lack of thickeners so this isn't a criticism at all. I liked that it tasted natural - other nut milks inevitably taste weird in some way due to the added calcium, vitamins and stabilisers, but this tastes pretty fresh and clean.

Overall, there's not a lot to say about this Innocent Almond Milk other than it does what it's supposed to! I would buy this again over other nut milks to avoid the unwanted additives, and I'll certainly be on the lookout for the Coconut version as I do tend to prefer coconut milks in general.