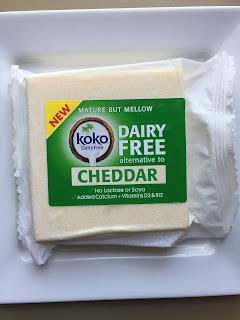 I've tried quite a lot of dairy free chocolate bars and other products now, but cheese is one thing that has eluded me. I did try Violife briefly but haven't bought it regularly as it apparently contains wheat starch in the ingredients - boo! So I was pretty excited when I found this new Dairy Free Cheddar Alternative made by Koko in Waitrose the other day. It's on an introductory offer, I forget the exact price now but it was around £1.79 or so. There's a Koko Dairy Free Cream Cheese alternative too, which I didn't buy. 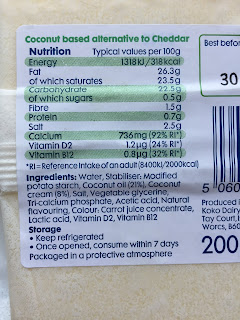 Described as "mature but mellow", this is a coconut based alternative to cheddar with added calcium and vitamins D2 and B12. It has cococnut oil, coconut cream and potato starch as the main bulk of the ingredients, and is "Vegetarian Society Vegan Approved", which made me chuckle...couldn't they get it approved by the actual Vegan Society? I guess second best is better than nothing at all! 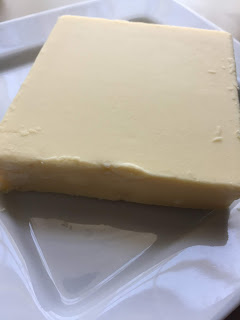 It comes in a block that looks pretty much like regular cheddar cheese, and has a vague cheddar like aroma too. It cuts a bit more softly than cheddar though, which is handy. 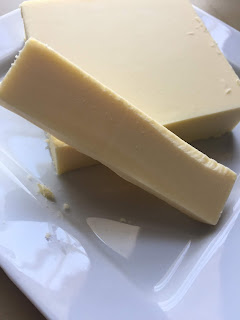 It tastes pretty good, and more cheese-like than I was expecting. It's definitely mature yet mellow like it's described; I think the coconut cream is what mellows it out yet there's also a sharper flavour from some of the other ingredients. It somehow works and tastes like a mild cheese. It's pretty good, and nice to nibble on in chunks. I didn't try melting it although I did add it as a topping to cooked rice, but I preferred eating it by itself. I imagine it'll make a great filling for sandwiches or on toast - if anyone does toast it please let me know how well it melts in the comments! 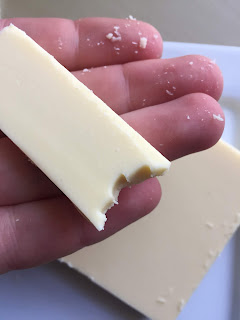 Overall, as a coconut based "clean" cheese that contains no nasties like corn, nuts, soya or gluten this is pretty darn good! It's something I can see myself buying again which I can't say for other types of vegan cheese. If you are on a restricted diet or have allergies, this is certainly the cheese for you!