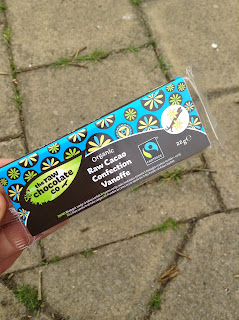 Recently, I undertook the mammoth task of giving up sugar for a while. Being a longtime fan of new snacks and sweets this hasn't been an easy task...temptation lies on every corner! So do forgive me if there's been a lack of snacks posts recently! I'll still be posting reviews I've got in the archive but after that...who knows. I may start featuring only healthier snack products. Time will tell!

As part of my "healthier" snack sampling I tried this bar of "raw cacao confection vanoffee" from the raw chocolate co, which I found in a health food store for 99p. It's basically a raw chocolate bar made from cacao butter, Lucuma and coconut sugar. So not exactly sugar free, but coconut sugar is supposed to be healthier than refined sugar and is low glycemic, plus its paleo approved if you're on a paleo diet. This chocolate is also vegan, dairy free, contains no gluten or soya, and is of course raw. So it certainly ticks all health boxes! 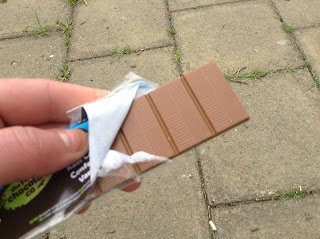 What the heck is a "vanoffe confection" though? Well, it's basically a raw version of white chocolate. The Lucuma, which is a "subtropical fruit native to Chile, Ecuador & Peru", imparts a sweet, almost vanilla caramel flavour, which I presume is why they've called it vanoffee. The coconut sugar enhances the toffee like flavour even more. The high cacao butter content means the chocolate melts in the mouth beautifully, and overall it tastes like a more luxurious cross between white chocolate and Caramac. Make no mistake though, this is far better than any "real" white chocolate could hope to be!

Overall, I can only recommend The Raw Chocolate Company based on this bar. I haven't tried any of their other chocolates yet but they do some interesting stuff with different flavours such as goji berries, mint, orange etc. I've seen some of their bars in Boots, but I'm not sure if Holland & Barrett stock them yet. To find out more check their website here which includes information On where to buy.
http://www.therawchocolatecompany.com