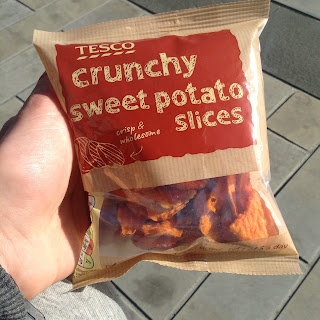 As part of my healthy eating drive recently, I've been trying some healthier snacks from the supermarkets. Luckily, it's getting easier to find healthy stuff thanks to a stream of new products from the various new paleo/raw/vegan companies that are constantly springing up. It seems Tesco are getting in on the act too, not only have they recently ditched a lot of sugary drinks from their shelves, they've also increased their range of fruits and nuts for snacking. They're also promoting their new vegetable crisps, which you'll find near the checkouts in many Express stores. They include Beetroot slices, which sounded horrible to me so I went for these sweet potato slices...ahem...crisps instead. 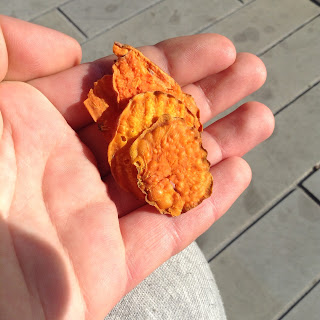 They're basically slices of sweet potato that have been baked until crunchy. There's no salt or oil added, just pure dehydrated sweet potato. I guess they thought these don't need any flavourings since the natural sweetness of the potato is flavour enough.

I enjoyed them, they certainly make a decent crunchy alternative to unhealthy crisps, but they were a bit flavourless. They were filling enough and certainly good if you crave a bit of crunch, I just think they could have done with a little salt or some herbs to make them more interesting.

Overall, I think these crisps have scope to be improved upon and maybe we'll see other varieties from Tesco in future. For now they're simply a carb snack only for the health conscious, certainly not crisps worth cheating on Pringles for!