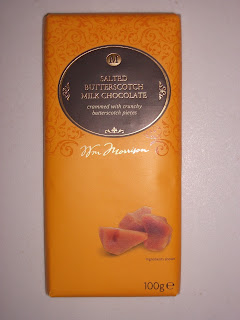 Morrisons are one of my main local supermarkets. They don't have the greatest range of chocolate around but have started to change that recently and introduced some new varieties (including the Afternoon Tea Selection I reviewed recently). Adding salt to chocolate seems to be in vogue at the moment, so I suppose it makes sense they've brought out their own salted chocolate bar. I didn't really pay much attention to the wrapper when I picked this up, I just wanted something chocolatey and sweet and assumed it was yet another salted caramel bar.

Described as "milk chocolate with salted butterscotch pieces", this cost £1.39 and contains 32% cocoa solids. It's basically a Morrisons version of Milka with Daim, but with richer chocolate and salty butterscotch pieces. And I'm not really sure if I liked it or not. It had a certain addictive quality because of the salty crunchiness of the butterscotch, and the chocolate had a decent rich taste, but...I think it was a bit too salty. I guess I'm not really used to salty chocolates. That said, it was good quality and I think many people would enjoy it. 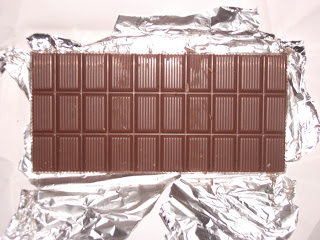 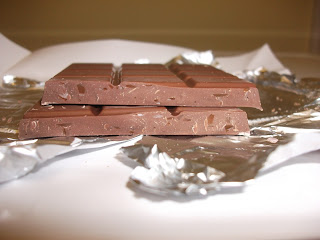 This bar is produced in Italy and has won a "Quality Food Award 2012", so it must be doing something right. I noticed Morrisons also do a raspberry dark chocolate bar, and one in a green wrapper that's possibly...lime flavour? Probably not, but I'd definitely like to give them a try sometime.
Morrisons