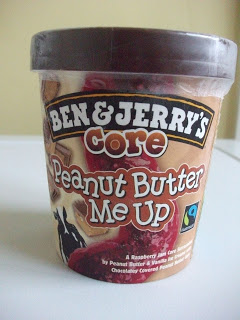 It wasn't so long ago that fellow snacks blogger Creamy Steaks wrote a post decrying the lack of interesting ice cream flavours here in the UK. And it's true; whilst the US are treated to new Ben & Jerry's varieties such as Red Velvet Cake and Key Lime Pie, the most exciting new flavours we get here in the UK are Karamel Sutra and Apple Pie. To be depressed and see what other nice flavours we can't get, check out On Second Scoop, a blog dedicated to the latest in US ice cream releases.

Luckily, Ben & Jerry's UK must have sensed our pain and have recently added this new "Peanut Butter Me Up" variety to their "Core" range, as well as a "Blondie Brownie" variety. 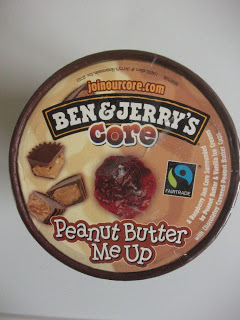 Described as "A raspberry jam core surrounded by peanut butter and vanilla ice creams with chocolatey covered peanut butter cups", I found this in Sainsbury's for a hefty £4.99. The ice cream contains only 4% peanuts, which had me doubting how "peanutty" it would actually taste.

My suspicions turned out to be right, as it didn't turn out to be quite the intense peanut butter and chocolate experience I had hoped. The "jam core" took centre stage and played a big part in the overall taste. I guess the idea was to emulate the classic "Peanut butter and jelly" (PB&J) combination popular in America (over there "jelly" is the same thing as "jam" here in the UK). The "jam" was really more of a fudgey, firm sauce, which tasted ok but there was far too much of it. It overpowered the peanut butter ice cream on the one side and the vanilla ice cream & peanut butter cups on the other. 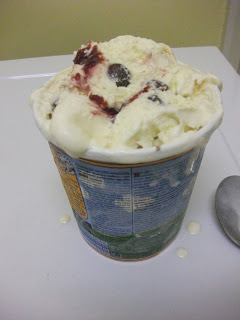 Don't get me wrong, this is a tasty ice cream from Ben & Jerry's, but I think the peanut butter cups should have been the star attraction. The jam "core" is an interesting idea and I guess PB&J fans will enjoy it, but it's not really my thing.

Overall, I think this "Peanut Butter Me Up" is a nice idea and it's good to finally get some interesting Ben & Jerry's flavours in the UK. Personally though I would like a tub of peanut butter cups and ice cream without the jam.