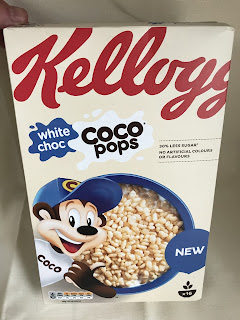 Recently Kellogg's announced a new product launch that got everyone rather excited indeed - they've gone and made a white chocolate version of Coco Pops! Yes, these have been flying off the shelves in Asda as everyone's so excited to try them. I'm pleased that white chocolate is so popular - it kind of flies against the companies saying that white chocolate limited editions aren't  popular in the UK doesn't it?

These are made with 30% less sugar and cost around £2.50 depending on where you get them from. They're currently in Tesco and Asda and presumably other stores too. 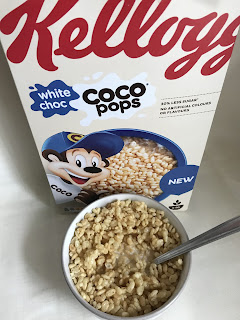 They taste pretty good! There's a nice comforting white chocolate taste from the coating, which somewhat reminded me of white hot chocolate powder, for some reason. It contains real white chocolate which is quite obvious in the taste. I think they could be improved upon with some actual white chocolate pieces mixed in, but I guess that goes against the idea of Coco Pops since they don't usually have additions. You can of course add some white chocolate chips or buttons of your own!

Overall, I can see why some may be disappointed with these but personally I enjoyed the sweet milky white chocolate flavour. It may not be super strong but it's probably the best you can get without actually coating them with real white chocolate. Definitely worth a try if you're a white chocolate fan!