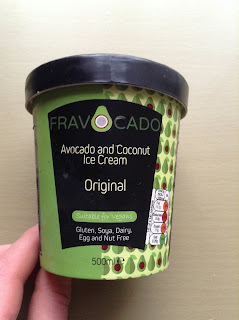 Today's review is for something a bit different, a new type of healthy ice cream featuring ingredient of the moment: avocado! Not just avocado, but that other superfood of the moment  - coconut! Yes they've only gone and mixed the two together to make a healthy, vegan, gluten free, nut free and soya free ice cream! It comes in two varieties: Original and Raw Cacao and is available from ocado.com and Waitrose. Fravocado kindly sent me some samples to review and below are my thoughts on each variety. 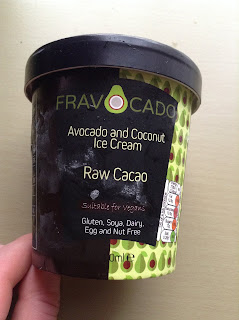 I'll start with the Raw Cacao because this was the one that divided my opinion most. It's made with Coconut Milk, 15% Avocadoes, Agave Syrup, Coconut Oil, Cacao Powder, Lime Juice, Vanilla Extract, Guar Gum, Xanthan Gum and Salt.

Opening the lid, it was super solid; practically a block of ice and even after waiting over half an hour it took a while to become scoopable. Eventually I decided to shave bits off with a spoon and eat it that way - hence the appearance in the pic below! 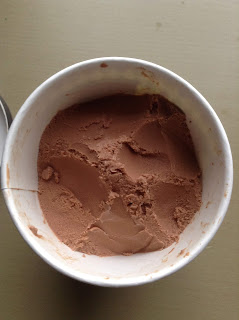 After a while I was able to scoop some bits into a bowl, although it was still pretty solid. I can only guess that the inclusion of avocado makes it a lot firmer than regular dairy ice cream. 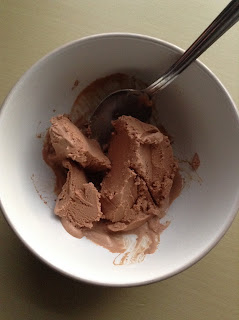 The taste was interesting. Because it's raw cacao rather than cocoa powder, it does of course have a more "sour" earthy flavour, which I'm personally not the biggest fan of. They've used lime juice in the ingredients, perhaps because this works well paired with cacao sometimes, but I felt it affected the taste negatively here. The agave syrup used instead of sugar adds to the unusual sour flavour, and I have to say I think regular cane sugar or coconut nectar would have tasted better. The avocado taste is noticeable and it definitely adds to the creamy texture. All in all this is an unusual ice cream - at first I didn't like it, but I kept going back to it and it started to grow on me! I think it's something you have to be following a vegan or whole foods diet to truly appreciate. 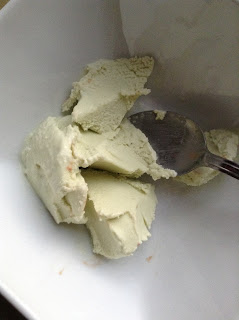 The Original flavour consists of Coconut Milk, 15% Avocadoes, Agave Syrup, Lime Juice, Guar Gum, Xanthan Gum and Salt. This one was hands down my favourite - it has a lovely creamy texture and mild coconutty flavour. It melts in the mouth much better than the Raw Cacao version which is a bonus. I really enjoyed it, and as far as ice creams made with coconut milk go, this is probably my favourite so far. The avocado seems to bring a richness that isn't usually present in most dairy-free ice creams and the lack of nuts usually found in these types of ice cream is a bonus.

Overall, I have to say I think Fravocado are definitely on to something with these ice creams. They're ideal for anyone with allergies to nuts, dairy, eggs etc and great for a vegan diet. If you're tired of other Dairy Free ice cream varieties these are worth seeking out.