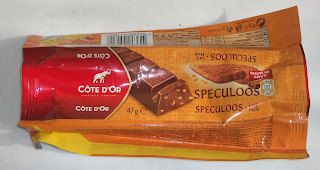 Here we have the Cote d'Or Speculoos Lait, a milk chocolate bar with speculoos biscuit pieces. Côte d'Or  is a Kraft-owned brand popular in Belgium. I believe they used to sell some of their bars in UK supermarkets, but they disappeared after a while. Nowadays they pop up randomly in discount stores.

This is one such bar I found in a discount store. They were selling them at 5 for a pound, which immediately made me suspicious. These days you're lucky if you can get three bars for a pound, so I knew something was up. I decided to buy just the one bar, which cost me 20p.

My suspicions were confirmed when I opened the wrapper - I was greeted by an awful musty smell with a hint of cinnamon. Usually I like cinnamon flavoured things, but this bar was rather unpleasant. There was a vague crunch from the speculoos biscuits, but they mostly tasted stale and musty. I couldn't taste the chocolate because the stale cinnamon taste overpowered the whole bar. Upon examining the wrapper I found it was close to the sell-by date, which I suppose should teach me not to buy from discount stores. Still, if a product is good, you'd think it would taste nice even if it's nearly out of date, right?

I'm not sure whether to blame the sell-by date for disliking this or just assume it was a bad bar of chocolate.

Have you tried this bar before? If so what did you think?